Jesus Proclaimed "The Kingdom Of God"—Understand It Clearly! 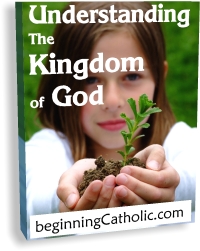 Proclaiming the kingdom of God was the starting point and the center of Jesus' whole public life.

Christ tells us plainly in the Gospels that he was sent to announce this kingdom, and to unite all the faithful in it. Every Christian must gain a solid understanding of this concept of the "kingdom of God."

That is the purpose of this brief eBook.

Written by renowned Scripture scholar Father Leopold Fonck, S.J., Understanding the Kingdom of God is a very accessible discussion of this important concept. (Fr. Fonck's work is also available in our How To Read The Parables.)

Many dimensions of the concept

The term "kingdom of God" had a specific meaning in Jewish thought at the time of Jesus. Understanding the Kingdom of God helps us discover its many dimensions by using a number sources:

Fr. Fonck uses these sources to give us a clear picture of the ancient Jewish idea of the kingdom of God.

He describes several essential characteristics of this kingdom—and outlines how the people of ancient Israel had distorted its meaning.

Jesus spoke so often and so forcefully about his Kingdom because he had to correct those common distortions taught by the Jewish leaders at the time.

Understanding the Kingdom of God details the opposition between Christ's proclamation and the false teachings of the time.

This eBook also lists the parables of Christ, organized into three categories of parables that describe:

This eBook is a perfect companion to How To Read The Parables, as Christ himself mainly used the parables to describe the Kingdom of God.

Written by a famous Scripture scholar

Fr. Fonck was a distinguished Catholic Biblical scholar at the beginning of the 20th Century.

Fr. Fonck's background and commitment to serving to the Popes means that this is a reliable guide to this important aspect of Scripture. It provides an excellent, readable introduction to the Kingdom of God.

Click here for the freebie downloads page for details about downloading this great eBook!


Check our home page for more articles about the Catholic faith!